On Sunday, the weather in Orkney was just about as peachy as it is possible to be for February: sunny, calm and with temperatures climbing through zero.

We have not had a long (for us) walk for some time, so set ourselves the challenge of climbing Wideford Hill, just to the west of Kirkwall.

Here is a view of Wideford Hill from Tense Towers... 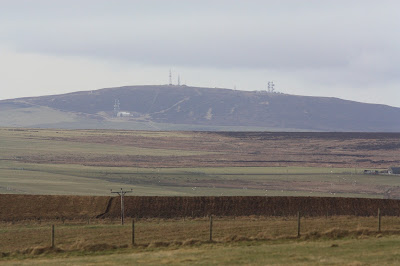 at a distance of about eight miles (thank you, Google). 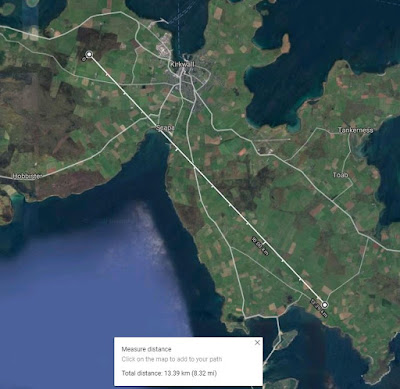 We didn't walk from home, but parked at the leisure centre in Kirkwall, navigated our way around the sports pitches and took the path leading through Muddisdale. Patches of frost-laden vegetation and the odd icy puddle were a reminder that we're not out of the woods of Winter yet. However, there has been much tree planting in this area and a few signs of an impending Spring were visible. The buds were beginning to burst on the bare sticks of Dog Rose (or possibly Rosa rugosa), with a few tentative leaves sampling the cold air. Alder catkins loitered in small groups on twig corners, whilst the branches of Ashes were stacking their decks with Ace of Spades buds.

The gentle climb continued alongside a golf course, then, after crossing a road, we began a rougher ascent up a muddy farm track. Our pace wasn't warp speed, but we were doing grate. 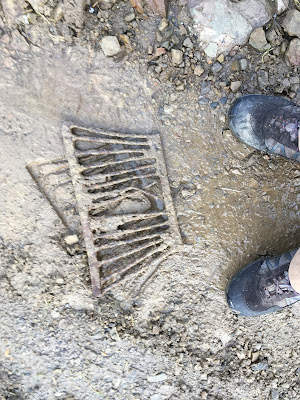 Stopping to catch our breath, here's the view back down the track at the point where pastures gave way to moorland. 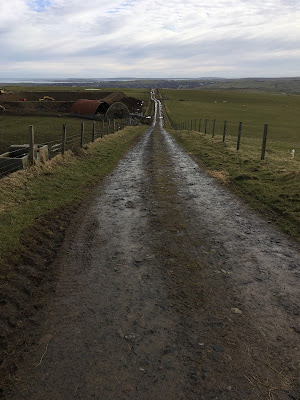 And now we were ready for the final push to the summit. 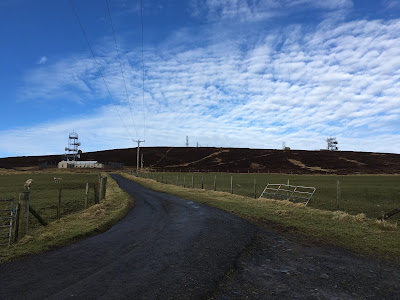 As the gradient increased, our speed necessarily diminished, which is just another way of saying "Let's stop for a photo opportunity."

Once at the top, we took in the views from the trig point, 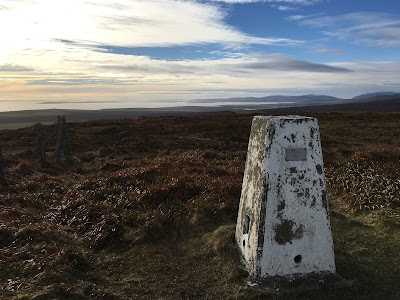 then the vista looking back towards Kirkwall, 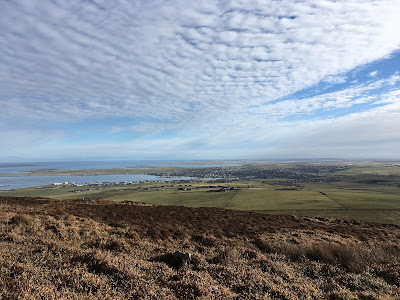 before we retraced our steps a short way downhill, then contoured around to visit the Neolithic burial chamber which sits on the western slope of Wideford Hill. 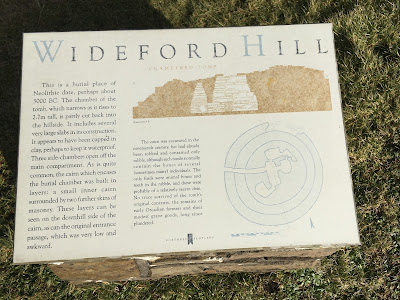 Thinking out loud, we realised that the last time we were here was our first Orkney holiday, twelve years ago. 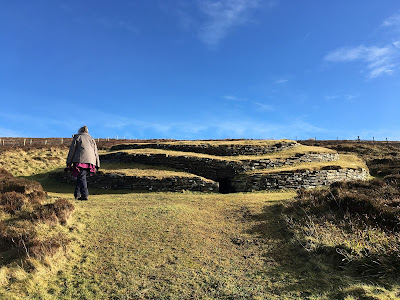 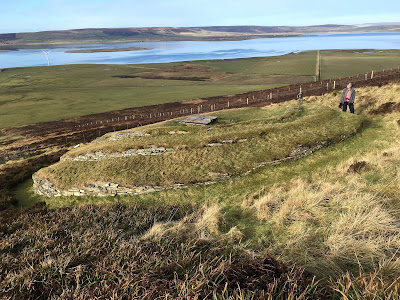 Then, as now, it was impossible to resist the temptation... 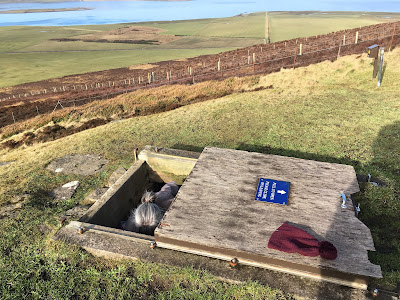 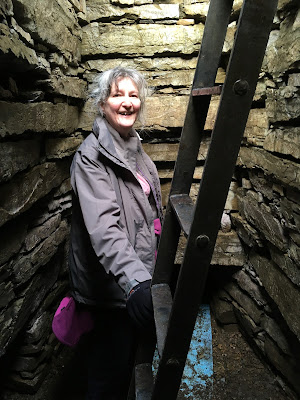 There are three burial chambers leading off the main chamber, as well as the original west-facing entrance. Many of the stones in the main chamber were covered with Victorian (and later) graffiti, a temptation that we were able to resist.

On our way back to Kirkwall, I spotted this Yellow Brain Fungus on a Gorse bush, one of the few spots of colour that we saw. Yes, I know it's orange. 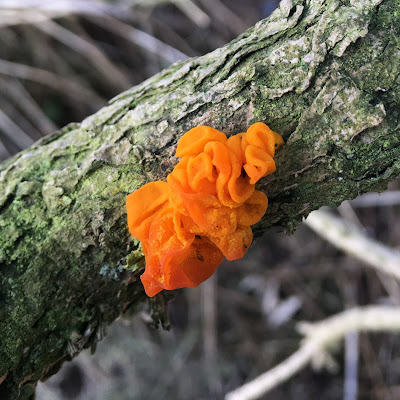 In some of the sheltered ditches, a few Lesser Celandine flowers were beginning to open, as if instead of photosynthesising, the plants were radiating sunlight back into the world.

And in a very predictable denouement, we returned home for tea and cake.
Posted by Imperfect and Tense at 21:48

you've certainly made it you're home now. That looks a nice wee hill, I wouldn't of bothered messing with the car though! I&T does some grate puns :•) regards, Mark.

Funnily enough, there WAS a chap cycling up the hill, he overtook us just before the top. Now that I think about it, I didn't see him return and he wasn't at the top when we got there. Odd.

A wild and beautiful land. Marvellous dash of colour from the fungus. Thank you for the tracks and signs book recommendation pre-Christmas. It arrived as a present and, having just found a pair of wings detached in the flower bed, have been able through its pages to identify who formed the sparrowhawk's supper- one of our chaffinches. Fantastic book.

Your week isn't short of adrenalin, eh? I'm glad that you're enjoying the book. No more garden casualty mysteries, and a world of found feathers to enjoy on walks/runs.

Indeed, on all counts!

Another grate little blog then including the mystery of the vanishing cyclist.

I certainly cannot keep up with your pace. My six mile walk around White City, Westfield Centre, Shepherds Bush, Hammersmith and ultimately Fulham was enough for me yesterday.

I left early for football with the intent of looking for myself at a much awarded and spoke about SuDS scheme next to Loftus Road, on wending my way back to White City I decided it would be rude not to divert into Westfield to look at a much referenced green wall only to find it under renovation. I then had plenty of time to get to the intended football match and decided on the healthy walking option instead of a bus.

My idea of the 'healthy walk' wasn't such a good idea after all. I'd overlooked one thing you guys don't have to worry about. By the time I reached my destination I was coughing and spluttering and the back of my throat burning due to the exhaust fumes.

Even the idea of a pre-match pint to sooth it didn't really do a lot and the burgers on sale at the pub would have broke my teeth had I been foolish enough to buy one!

The SuDS and game was good tho - we even won - again!

I'm glad to hear that some good designs are making it through to fruition. FFC do seem to be on a bit of a roll. Boro, on the other hand, aren't even a club sandwich.

But it'll all end in tears so I'm making the most for now until normal service is resumed!