One of the great things about the cottage we rented near Aberfeldy was the amount of wildlife on the doorstep. Not literally, although the owners' hens were regular visitors to that particular location.

Early in the holiday, I was idly looking out of our bedroom window, admiring the view across the valley, but slowly becoming aware that I was actually concentrating upon something else.

It was the tinkling song of a Goldfinch. 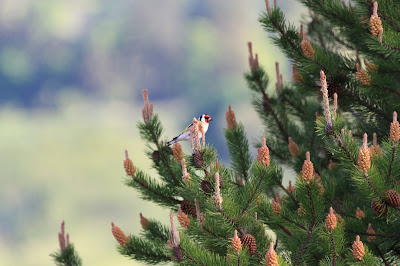 I continued to watch the Goldfinch for a while and realised that it had a partner. Then my interest went up several more notches when I spotted a nest in the conifer outside our window.

Photographing it wasn't straightforward. The light was only really in my favour late in the afternoon, although as Our Lass isn't prone to siestas, I didn't have to worry about disturbing her. No, the problem was more along the lines of factoring in enough magnification to make out what was going on.

My DSLR camera is normally set up with a 300mm prime focus lens, ever ready for that perfect dragonfly shot (still waiting...), but this didn't quite cut the mustard. Then I tried using a telescope and my phone as a crude digiscoping experiment that was more Blair Witch than Gold Finch. Even using Our Lass's compact digital camera and the scope gave very aberrant chromatic results. So in the end, I bolted a x1.4 extender onto the 300mm lens and heavily cropped the ensuing images. 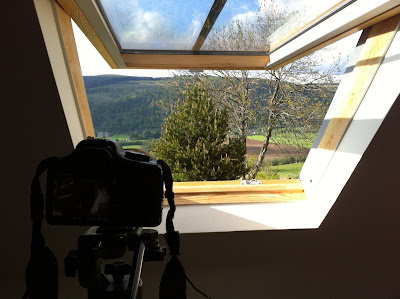 At least I was using a tripod, the most underused of all my wildlife watching paraphernalia. It normally only gets an airing for astronomical events. But by setting the camera to Live View and increasing digital magnification to x10, I was able to focus reasonably crisply, or at least to the crispness of my eyes. Then it was a matter of delaying the shot by a couple of seconds to allow everything to stop shaking and Hey Presto! 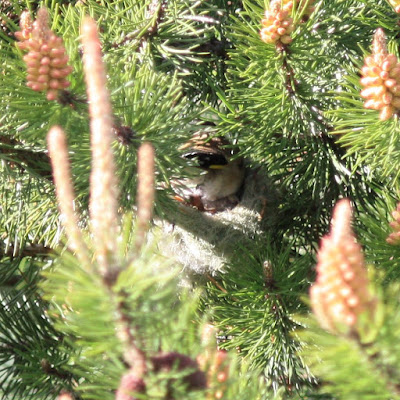 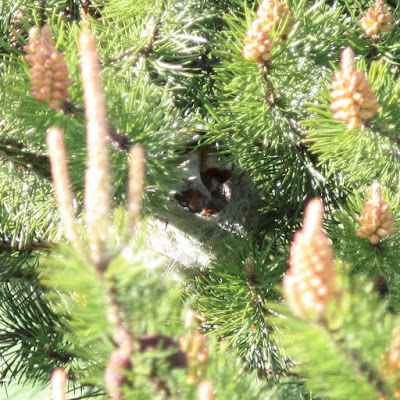 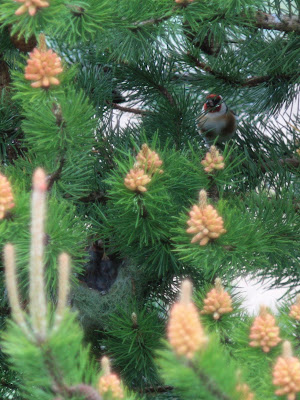 And a bit later still... 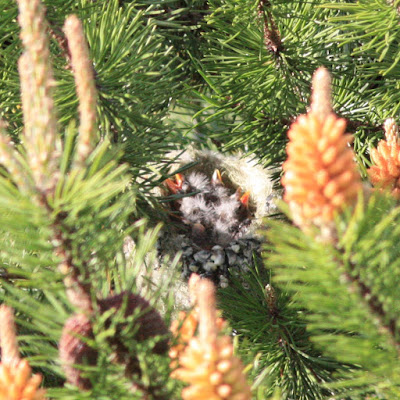 During our second week at the cottage, the chicks continued to grow, but I wasn't able to take any clear images. It was windier for one thing and this made the tree move around much more, either blurring the image or obscuring the nest altogether. The nest itself seemed to be shifting position, but I don't know whether this was due to the branches flexing or the weight of the growing brood.

However, shortly before we left for home, I am happy to report that that chicks were doing well, with much exercising of wings and the likelihood of a successful fledging.

The Scottish Tourist Board probably don't take into account the provision of magical wildlife moments when auditing a property for a star rating. But if they did, then this one deserves at least four Gold stars.
Posted by Imperfect and Tense at 22:16