This one's for Captain Sundial

Another day, another beach.

This one's a bit closer to home, just a leisurely amble down the hill from Tense Towers, to fritter away a Sunday morning with some quality beach-combing. Shells, sea glass, animal bones, seaweed, there's always something interesting to find. 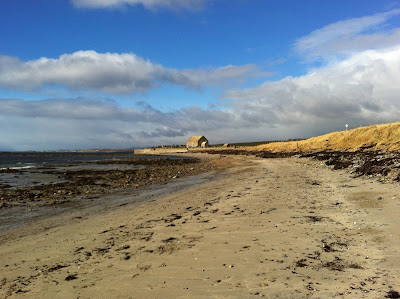 In the distance is St Nicholas' Kirk, often featured in these pages, but I don't think I've photographed it from this beach before. What isn't apparent from the image is that although the church stands on a low mound, it is not on the top of the mound, but off to the eastern side of it. And the mound obviously pre-dates the church.

Does this matter at all? Well, of late, it has started to puzzle me, because of the other archaeological sites in the area. Across the other side of the bay of Howes Wick is Castle Howe, an undistinguished lump sat between shore and pastures. It looks for all the world like a broch site (and there's plenty of those about in Orkney), but excavations in the past have shed doubt upon this. Then, farther afield, there is a Neolithic tumulus, known as North Cairn, on the rocky peninsula of Rose Ness. In my hazy thoughts, I reckoned that a straight line could be drawn between all three.

Certainly, drawing a line with a ruler on an OS map of the area would seem to suggest this is correct. Don't worry map addicts and pedants, I didn't really draw a red line on one of my precious paper maps! 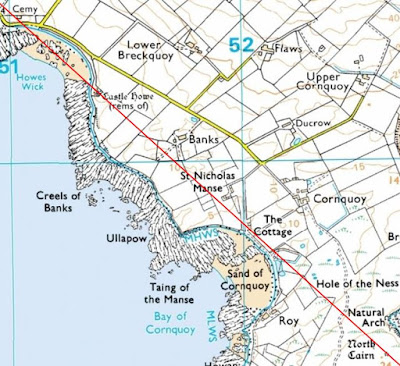 Unfortunately, I wasn't carrying anything other than my phone, but a quick trip to the churchyard, locating the high point and then looking south east (yep, I wonder what celestial event that augurs, eh?) fairly well nailed it. So, this exercice might have to be repeated early in the morning on December 21st. 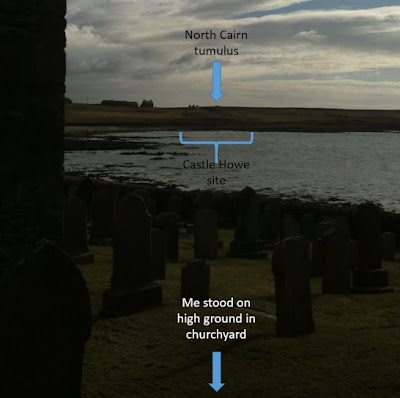 To be continued...
Posted by Imperfect and Tense at 19:41

Orkney is an amazing place to study our histerical heritage. Let's hope it's not too cold on 21st when you check it out for the winter solstice.