In the north west of Shetland lies Eshaness, a landscape forged by a volcano several hundred thousand years ago.

Fortunately, the temperature's dropped a wee bit since then, though as we leave the car and step into the wind and rain, I can't help thinking that a few degrees warmer wouldn't be so bad. Wrapped up against the elements, we can only marvel at the fulmars and ravens using the geography and air currents like some giant aerial skate park.

The rock formations of Eshaness are picture postcard stuff. Out to sea are several sea stacks, Da Drongs (Shetlandic for The Drongs) and an impressive sea arch, Dore Holm, which resembles a drinking horse. By the lighthouse is a blow hole, Kirn o Slettans, which is the remnants of a side cone from the ancient volcano. The cliffs are a slice through the physiology of the eruption, with solidified ash, lava, agglomerate and pryoclastic flows preserved in the Devonian landscape. A kilometre north, a subterranean passage leads 100m under the cliff to a gloup known as the Hol o Scraada, where the roof of a sea cave collapsed. 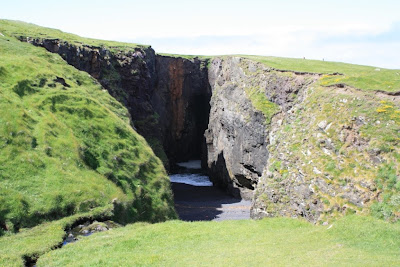 Another kilometre or so brings us to Grind o da Navir, a storm surge beach on a colossal scale. The pebbles in this case being half ton lumps of rock, excavated by Atlantic storms and hurled inland by the power of the waves. Standing on the floor of the beach, it's like being the world's tidiest quarry. 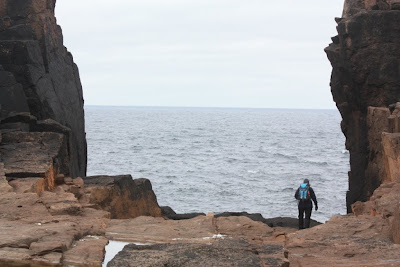 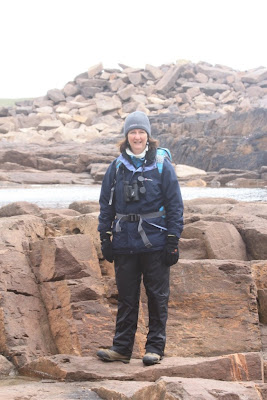 The following day, we awake to the realisation that we've been here a week and for the first time don't have a plan for the day. After talking to some fellow guests over breakfast, we decide to head to Fetlar, two short ferry trips away. I must admit that I'd been putting off the ferry trips because I was struggling to understand the time table. I was much reassured, however, to learn that I was not alone in this regard, on hearing that the school children of Fetlar had taken it upon themselves to write and publish a much more easily comprehendable version.
On reaching Fetlar, we made for the RSPB reserve at the Mires of Funzie, in the hope of seeing Red-necked Phalaropes, the island being one of the their few UK breeding sites. Sadly, fortune wasn't with us, though we did see about a bazillion Snipe, or Schnip! as our Dutch comrades in the hide would exclaim at regular intervals.
The return trip to mainland meant a 55 minute wait on the island of Yell, so we detoured slightly and settled down to a picnic tea at West Sandwick. After munching our sarnies, watching the waves crashing on the beach and photographing some orchids in the meadow behind the dunes, we eventually realised that it was nearly ferry time. Our lass drove like the wind, whilst I shouted encouragement along the lines of "Keep your foot down!" and occasionally screamed "More speed!". On reflection, this may be why the island is called Yell.
Back on north Shetland, we stopped off beside Voxter Voe to check out a shingle beach. We had seen a chap there that morning, armed with a camera, so thought it worth a look. And so it proved, when our lass spotted a Ringed Plover chick and then an Arctic Tern chick, two little fluff bundles unconcernedly preparing to face the world and all its dangers. Let's hear it for Team Pom Pom.
Posted by Imperfect and Tense at 22:01