Normally, as the saying goes, I can resist anything but temptation, so the idea of having the will power to go "cold dragonfly" for twelve whole days was a bit daunting. What's this? Is the old git trying a novel way to raise money for charity? Has the last marble rolled out of his ear and Tink...tink...tink...tinked off down the road?

Actually, no, we're going on holiday. To North Ronaldsay, the most northerly isle of Orkney. No odos admittedly, but plenty of everything else with a bit of luck. Bring it on.

From our bedroom window, we can see a wind turbine (the Bird Observatory is a rather environmentally-friendly building). We find it a handy indicator of which direction to expect the weather from. For the uninitiated, we go on holidays for wind, waves and weather rather than sun, sea and sand, though North Ron has those too. Some enterprising Starlings have made a nest in the electrical housing at the rear of the turbine, so ensuring that their chicks are sheltered from the excesses of the Orcadian elements by a combination of Man's ingenuity and Nature's tendency to fill a void. 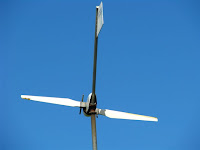 Day 2
It's a 5 minute weather day today. If it's raining, not to worry, just wait 5 minutes and it'll be fine. If it's sunny, on the other hand, better get out there quick and enjoy it, 'cos it'll be raining in 5 minutes! Made an abortive attempt to find the island's one calling corncrake and then remembered I don't do late nights.
Day 3
There are plenty of seals around the coast, Common and Grey. The former have pupped and the little bundles are rather cute. Certainly way too cute not to photograph! In the evening, we witnessed a confrontation between two females over ownership of a pup. Weird, you can actually hear Gordon Buchanan's voice in your head as the drama unfolds. 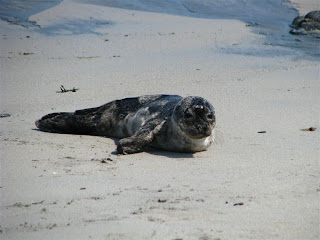 Oh my goodness. What a day! Whilst looking at some orchids growing between Yellow Flags on a grass verge, we spot a male Blue-tailed Damselfly. There are odos on North Ron, just no-one thought to look. Whilst relaxing before our evening meal, a Basking Shark slowly meanders across South Bay. Then, dosed up with caffeine, we remain alert long enough to hear Mr Corncrake. Unless it was that Simon King bloke with his comb and credit card trick. Hmmm. Thanks must go to the ever-helpful and friendly locals who were only too happy to share their wildlife with folks "fae the sooth".

A quiet day, writing postcards sitting on the rocks as the tide went out. You could feel the sounds of the surf and the calls of the sea birds flowing into the ink as the words took shape. Noticed that the Black Guillemots (Tysties) have designs on Riverdance. They kept gathering in threes and fours to try out their latest routines. It must be some sort of courtship ritual, but we couldn't stop laughing. 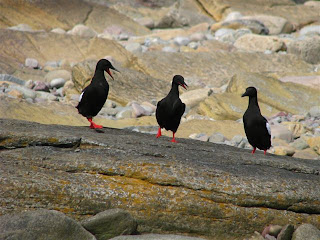 To be continued...
Posted by Imperfect and Tense at 20:40

Come on, the anticipation is killing me. By the way, when I said the Ulverston Canal was teeming with d/flies that's what I meant. You could almost walk across the canal on them. If only I knew the name of them, but with my eyesight I probably wouldn't recognise one species from another.