We wander back around Loch of Garso and found some more Blue-tails, both males and females. Sadly, there's no access to the water's edge, which makes it difficult finding exuviae for definite proof of breeding.

Our circumnavigation of the island, outside of the Sheep Dyke, is being done in stages. No point trying to tear round the 13 odd miles of it in one go. There's too much to see and hear. Today's section is Linklet Bay. We begin as the tide starts to ebb, soaking up the atmosphere of blue sky, azure sea, white sands and small flocks of waders. MGLW had to almost elbow her way to the tideline... 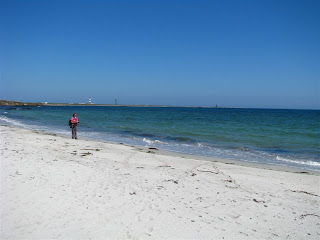 We allow ourselves the luxury of a taxi ride to the other end of the island as we're booked on a tour of the lighthouse at 10.30. After walking everywhere for a week, it seems incredibly fast but probably isn't. I cringe as we approach the one sharp bend en route. Get a grip, man! The lighthouse is now automatic but the associated buildings are being turned into a museum to create a bit more tourism and much-needed jobs. This one replaced the Old Beacon (featured on Restoration) and is the tallest land-based light in the UK. 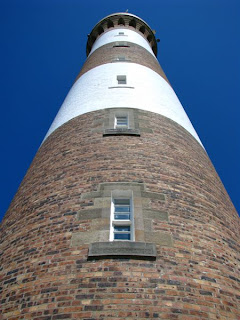 We had views to Fair Isle and Shetland as well as being able to look down on the passing skuas. In a directional rather than a critical way, I mean.
Day 8
Back on Shanks's Pony today and back to Linklet Bay too. We're heartened to see 9 fledged Arctic Terns at Haskie Taing, though their mums and dads still like to use me as target practice. By the time we return to the Observatory in the late afternoon we are absolutely chin-strapped... until we're told of a Red-Necked Phalarope on Gretchen Loch. It's only a few hundred metres to the loch so it can't really be described as a twitch. Honest. Adrenalin cuts in and we scramble over the rocks to catch a glimpse of this natty little wader, before tea (or dinner for you Southerners). Forgot the camera in my haste. Oh arse! By late evening, I've recovered my composure and hit the sunset. 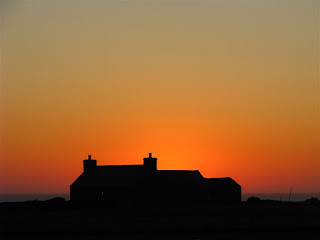 Chatting to some of our fellow guests at the Observatory, we're introduced to the alternative Beaufort Scale for Orkney. I should say that these particular guests were builders from Harray, who knew only too well about the vagaries of the Orcadian weather. The normal Beaufort numbers 1-9 are actually the amount of pegs required to secure one item of clothing to the washing line. Whilst zero means it's "too windy f' claethes".

But the sunsets are a bit good... 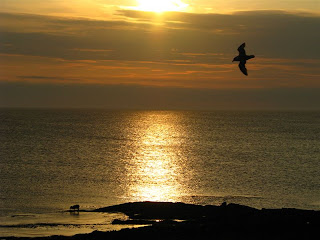 A very, very warm day by North Ron standards, into the low 20s. The butterflies were out in force. Painted Ladies, Red Admirals and Large Whites. We even spotted a solitary Small Tortoiseshell. MGLW took the opportunity to revisit several sites to take photographs of various flowers, Northern Marsh Orchid, Heath Bedstraw, Thyme and quite a few we still haven't worked out what they are.

In retrospect, not the best day to go sea watching. We left the Observatory in bright sunshine, but by the time we'd made it halfway up the island, it was becoming distinctly hazy. Perhaps that should be indistinctly hazy. Slowly but surely, as we approached the lighthouse, it disappeared from view altogether. On reaching the hide, situated between the Old Beacon and the lighthouse, we could see neither.

Fog. Apparently always happens after a hot day. Only one scheduled flight made it to the island, rather than the expected three. Hmmm, hope it clears for tomorrow. Honest!

The visibility improves sufficiently to catch our flight back to Kirkwall. Whilst waiting for our connection to Glasgow, we have a potter along the beach at Inganess Bay and spot this homeless hermit. 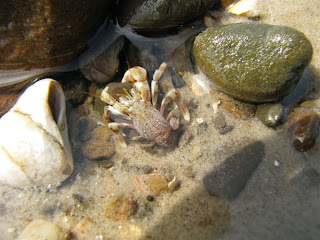 The shell in the photo was my attempt at playing estate agent, but the crab wasn't interested at all.

To sum up, it's been a brilliant week and a half, much fresh air and exercise, wonderful food and fantastic natural history. A huge Thank You to the team at the Bird Observatory, for making us so welcome, answering all my stupid questions and providing endless advice. Cheers, folks!
Posted by Imperfect and Tense at 11:42

Thanks for the kind words, your Anonymousness.
Just imagine what the pictures would be like if I was any good at photography!

Can't you ask that Dockache bloke? He seems to have got the hang of it :o)