Visual migration, no bones about it

The Autumn migration of birds from their Summer breeding grounds further north to areas south where they will overwinter has been eagerly awaited by birders in Orkney. With the recent weather giving alternate days of wet/windy then calm/sunny in a repeating pattern, it would seem that this migration is now well under way.

The local 'bird alert' text service was in overdrive, with ever more rare species being discovered along (mainly) the east coast of the archipelago. Whilst we only live a scant half a mile from the nearest bit of shoreline, this isn't to the east, that coast is probably about two miles away. Therefore, we don't experience quite the same level of feather-induced adrenalin tickling our fancy. But that's not to say we're immune from upping the amount of 'staring out of the window in hope'.

And, amazingly, this tactic actually paid off in a way. As I wandered out of the bathroom and down the corridor to the lounge, I glanced left across our bedroom, through the window and out to the garden and fields beyond. There on a fence post was a Blackbird... no, not a Blackbird, a black bird... with a white chest band! Holy moly, a Ring Ouzel! I'd not seen one of those in Orkney before, and certainly not from our home. It was gone in an instant, sadly, so no time to rush for my camera or summon Our Lass.

As it was a lovely morning, we decided to go for a wander and, as we donned boots at the front door, a pair of birds called from overhead. I glanced at Our Lass in a 'I don't recognise that' sort of way and we both brought our binoculars to bear on the unidentified twosome as they landed, conveniently, on a nearby fence.

Bramblings! Further scanning brought us a Song Thrush and several Chaffinches (yep, we only see them on migration). Swallows were hunting around cattle in the pastures, and small flocks of Skylarks were happily burbling to one another as they swooped down to feed in the stubble fields. In some respects, we would have been better off staying at home, as the walk only brought us a couple of more Bramblings, a Robin and several Chiffchaffs (all seen from the road as we passed folks' gardens).

Bizarrely, I was quite envious of the Robin, as we hadn't yet seen one at Tense Towers in the second half of 2018.

The following day was dreich, so staring out of the lounge window (through the now cleaned glass!) brought no new sightings. Forlornly, I gave up and wandered into the kitchen to make a brew, which was quite fortuitous, as this was the window through which I should've been looking. My garden project has spent another year not happening, so the silage wrap and worn tyres are still in place. You may recall that we had a Snipe visiting last Winter? Well, whether it was the same one, I don't know, but it brought a friend. 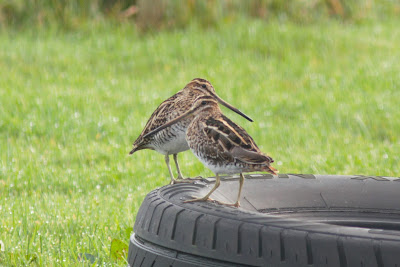 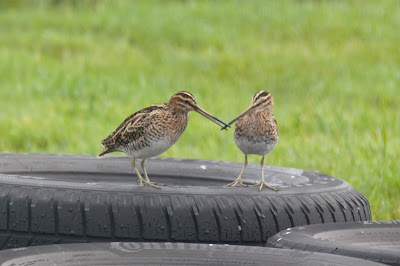 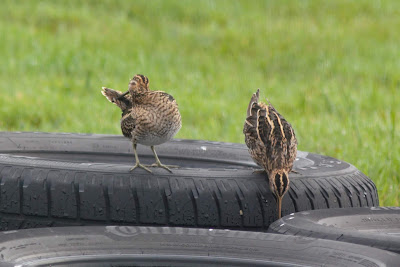 Not a rare bird by any means (they breed locally), but to have such great and prolonged views was a treat and a half. And, several days later, I finally managed to spot a Robin transiting through our garden!

With the rain continuing into the afternoon, I resolved to promote marital harmony and set to a task which I had been putting off for over a year. Early in 2017, whilst working on the island of Eday, I had been given an owl pellet (as compensation for not seeing the bird that regurgitated it!), and the pellet had sat in our kitchen ever since. I fully acknowledge the forbearance shown by Our Lass in regards to this situation, but enough is enough, eh?

The bird in question was a Snowy Owl, so the pellet wasn't small like the ones I'd previously dissected from a Spotted Flycatcher, a Barn Owl or a Kestrel. Those latter two had often contained mouse or vole skulls, so what would I find in this furry grey lump? 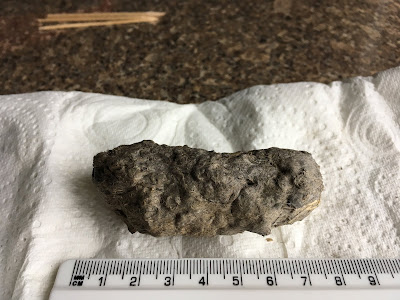 Well, aside from all that grey fur, which was probably the big clue, there were many vertebrae from a mammal much bigger than a mouse, or even an Orkney Vole. I'd say probably a Rabbit, as the local records centre doesn't have any data for Brown Hare on Eday. 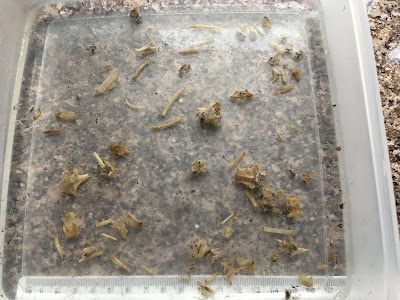 And, yes, I have washed my hands before typing this.
Posted by Imperfect and Tense at 11:00

wow! great stuff sir! You should pick up more passage birds - those flying overhead and calling and those flitting in bushes. Great time of year to be looking for the unusual or the 'that doesn't look/sound familiar.

I've always learned brambling call as 'treeeee' something you lack on Orkney though :)

Learn some rare pipit flight calls from Xeno-canto - you might be surprised and rewarded!

Totally brilliant post! Chuckling at your excitement over a robin when I see several a day here. But oh my! A ring ouzel! I’d love to see one here. Pretty jealous of your snowy owl pellet too. We had some brambling over winter with us for the first time last year... I am waiting to see if they return. Love the snipe, one of my favourite birds. We get them in the ditch on the lane in bad weather. Have you heard about the catbird that’s currently in Cornwall? Very like a male blackcap, I thought.

JD, you're probably right about pipits, but I don't know whether I would trust my hearing. That said, my current modus operandi of "Is it in a meadow or on a rock?" is not the most accurate way of keying out the species. Funnily enough, when we venture down into mainland Scotland in Spring/Summer, I do listen out for Tree Pipit, that blatant rip off of Chaffinch with the Mastermind beeps at the end.

Thank you, CT. After decades of suburban garden indoctrination, it really is difficult for me to take on the concept of 'the new normal'. Twice yearly visits from a Robin (and it can't be the same one, surely) are a symptom of this. The towns and villages here, with more shelter, do have the more usual species (though rarely Blue and Great Tits or Great Spotted Woodpecker), but Tense Towers still has little in the way of covering vegetation or nearby hedges. But Snipe, birds I think of as symbolising wild places, hold a special place in my heart. This week, the islands have been inundated with Redwings, thousands of them, and some Fieldfares, though I've not caught up with the latter.

Heading down here perhaps? I saw redwing and fieldfare early in the autumn, outriders I guess as I’ve hardly seen any since. I’m waiting for the siskin to come back out of the forest up the road. Still warm here though. Best spot this week was a female sparrowhawk sitting on the bird table while the sparrows in the hedge a few feet away chattered, completely oblivious, then fell silent in an instant as she flew over them. It was like a switch being flicked.

Ah, the noisy classroom full of cheeky Sparrows, not paying attention until the teacher walks in! I spent the afternoon battling with some troublesome accounts, but was aware of a sound from outside. Eventually, Our Lass said, "Are those Whoopers calling?" so we jumped in the car and drove down to the nearest lochan, where twenty or so families of swans were feeding and preening. Magic!