Earlier in the year, I blogged about one particularly unkempt bit of our generally unkempt garden, the wildlife triangle. Since then, the area has been left to manage its own affairs as Nature sees fit, which isn't the same thing as us planning what happens.

To be fair, after we went all postal on the dochans, there's pleasingly few to be seen, just one or two to provide somewhere for dock-centric wildlife to call home. Due to the disturbance of the soil, Nettles have been a big winner, so too the Mystery Brassica, whilst there's also loads more Fumitory. But mainly it's grass, very long grass, which swamps everything else. Our Lass has written 'Grass' at the top of my 2018 Wildlife Triangle To Do list.

So, what of the stuff we hoped would grow? Well, one or two clumps of wanted 'good for pollinators' flowers have appeared, which is heartening.


Meanwhile, in another part of the garden, even less managed, but also with very much less in the way of nutrients, some Purple Loosestrife has put in an appearance. 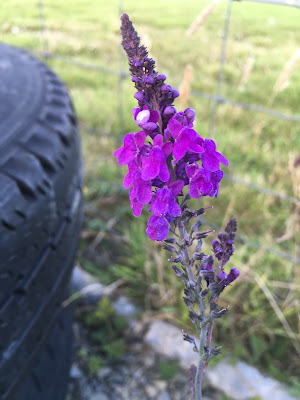 Posted by Imperfect and Tense at 17:55