To the power of four

Perhaps it is because we lived on Burray for two months, but one of the Churchill Barriers fascinates me. And it's not the ones that cause all the traffic problems when the wind, weather and waves combine. No, it's Barrier 4, which connects Burray with South Ronaldsay.

Recently, I was looking through a book of old photographs that I'd borrowed from the local library. Amongst all the interesting pictures of times past was this photograph...

This image shows the newly-constructed Barrier 4 open to traffic for the first time. Several 'block' ships (the previous defence against a sea-borne attack) can be seen on the east side of the barrier, where they were scuttled to restrict access to Scapa Flow (now on the west side of the barrier).

The area looks very different now, not least because there are crash barriers to prevent vehicles falling into the sea. But more of the differences later.

With my appetite whetted, I searched for other images of the barrier on the web.

There is a site record on the webpage of the Royal Commission on the Ancient and Historical Monuments of Scotland, with five images taken at different times. This aerial photograph from the late 1940s shows the barrier and block ships from overhead. 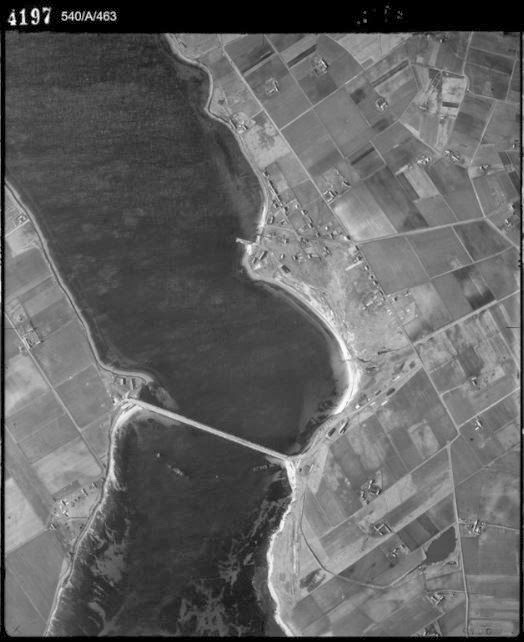 The barrier is still a narrow causeway between the North Sea and Scapa Flow.

Contemporaneous with the above shots I can but assume, is this postcard which is now available on eBay. 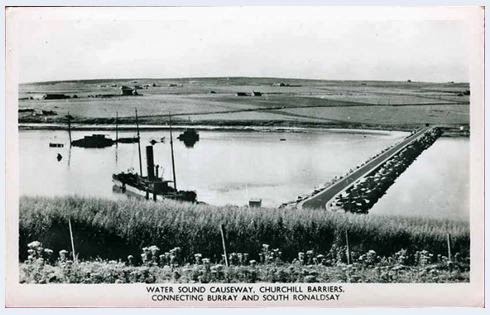 One of the local ferry companies, Northlink, has a short article about the barriers on its website, where the image below can be found. Sadly, I do not have a date for this photo. 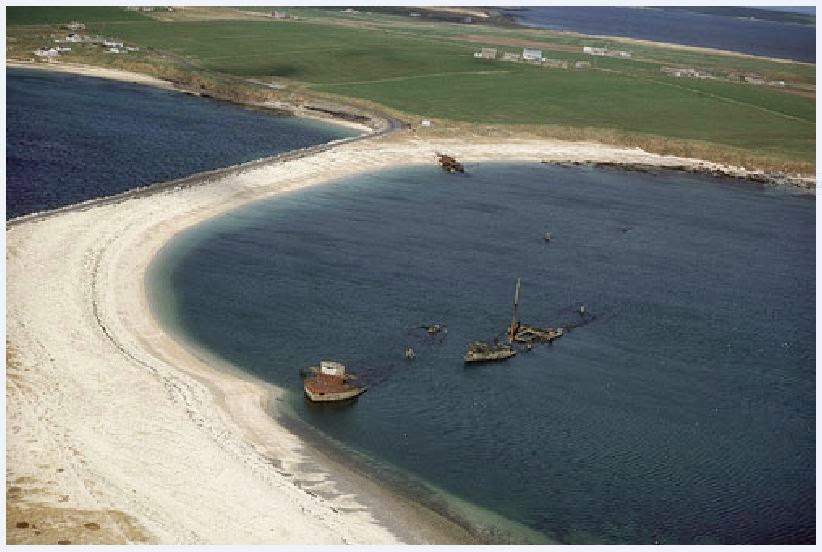 However, as can clearly be seen, not only has the power of the sea begun to break up the block ships, but a sandy beach has formed.

Probably from around the same time, a postcard was issued, also now available, like so much else, on eBay. 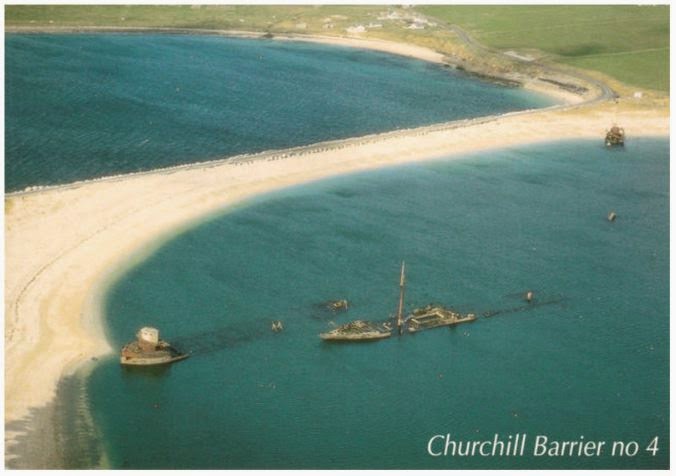 Moving forward in time to nearer the present, the road across the barrier was upgraded and fitted with crash fencing on the Scapa Flow side, as can be seen in this photograph from a genealogy page of the Cromarty and Ross family. 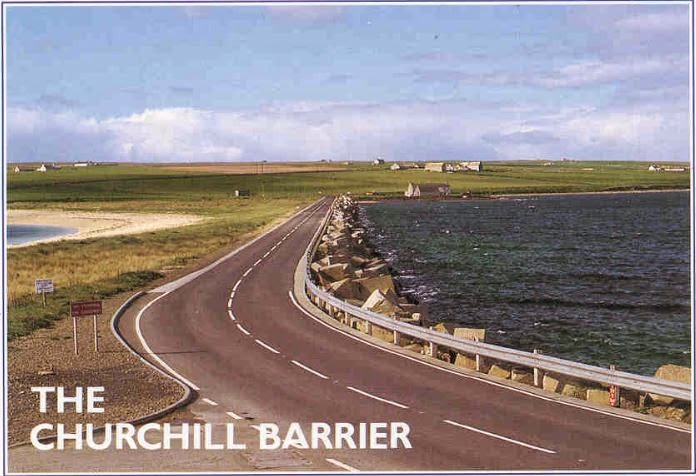 These days, the dune system on the east side of the barrier is still growing. and after south easterly storms, the sand has to be removed from the road. I nipped across to Burray this afternoon to try to recreate the first photograph at the top of the page. Coincidentally, a hailstorm was coming in from the west, so I didn't hang around long! 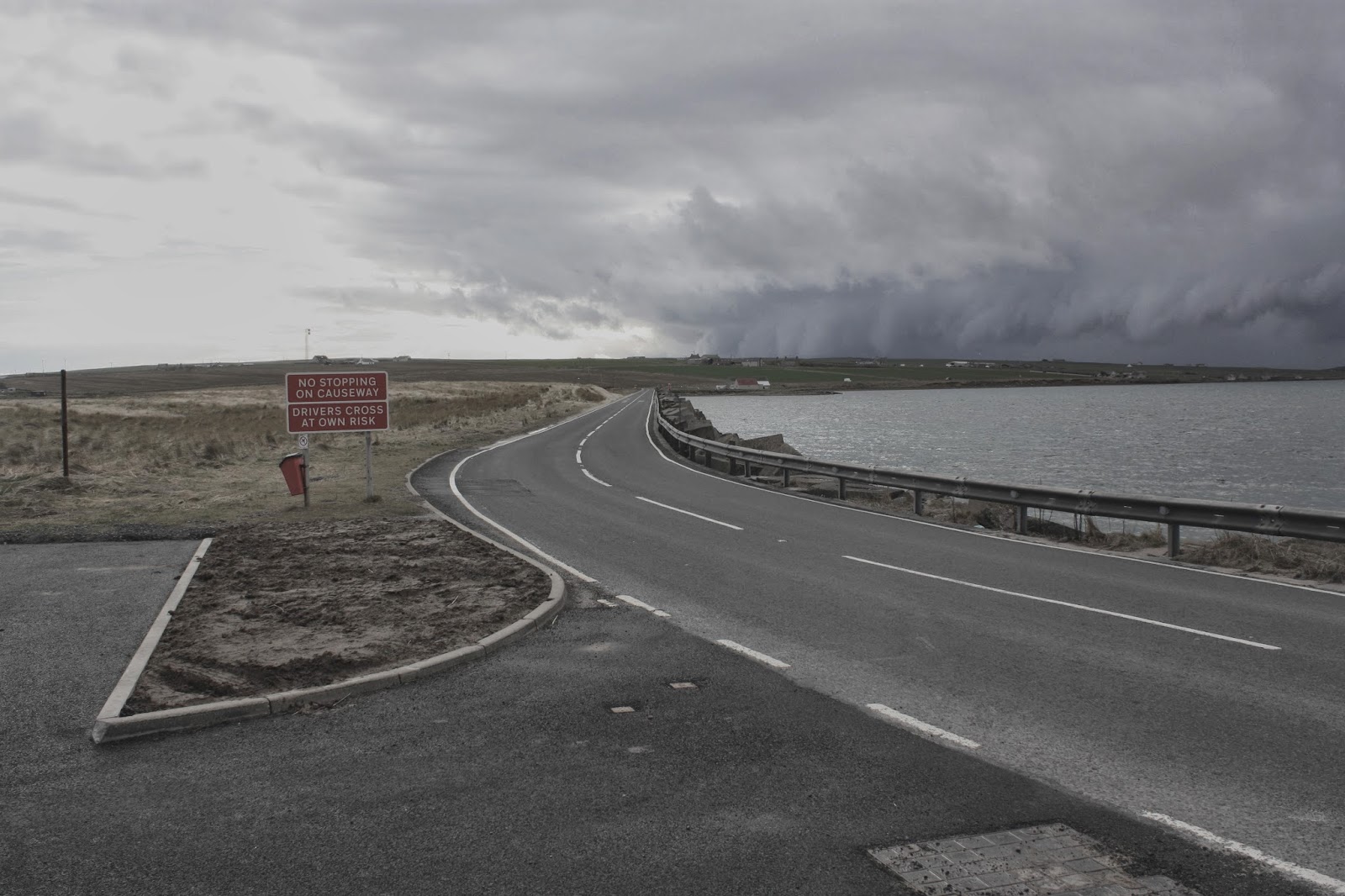 Finally, here's a shot from a different day, from the other end of the dunes and looking back to where the original photograph was taken, approximately right of centre where the small white building is located. 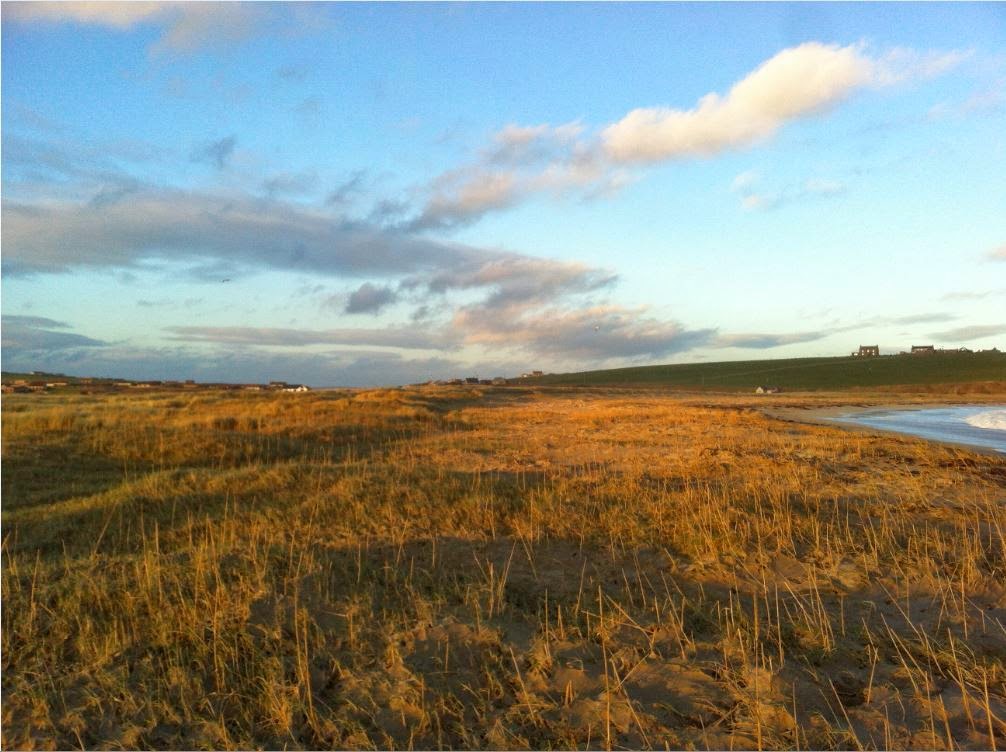 I find this dynamic landscape enthralling, that such a habitat can be formed within the span of a human lifetime. Where was the sand's original location? How has the movement from one place to another affected wildlife? Which reminds me, today was obviously a camera day, so no Snow Buntings. Gah!
Posted by Imperfect and Tense at 17:37

Does the new strip of sand mean it's not a separate island anymore?

Good question! I would say "No," because I can think of other islands joined to each other by a sand bar where each is considered separate, St Ninian's Isle off Shetland Mainland, for instance. Also, I think it would be very hard to convince the population of South Ronaldsay that they now live on Muckle Burray!

Fascinating piece Graeme. So what is the rock-type of South Ron' or Muckle Burray? Could the sand be local erosion, or equally have just moved from the sides of the inlet up to the end. If not then you are looking at much further afield or from the seabed/local sandbanks. You might also be able to tell its origin by the grain size/colour. White shell sand versus eroded sandstone.

Geography in action. Is this an isolated case, or have beaches formed and grown on each of the barriers? The absence of currents through the inlets would also suggest that the Scapa side is likely to have silted up a lot and also formed a shallower habitat, or more mudflats for birds.

The next step in the classic beach succession is the form of willow carr, more terrestrial sediments, and maybe small scrub. Any signs of this yet?
(Maybe I should stop there!)

Martin, Only Barrier 4 has done this. And on the North Sea side. We've not seen any scrub succession yet, though the area is occasionally used for motor bike scrambling (and possibly a supply of sand?). It is definitely sand as opposed to shell, but I'll follow up on your suggestions to investigate further.

All very interesting. I don't know if any of the other barriers have a water pipe/bridge beneath them to allow the currents to continue. There appear to be beaches on either side of barrier 3, but not at the barrier and a possible long-term extension of the island between 2 and 3 towards the east in the form of downstream sand flats.
I suppose the other possibility is that if there is much in the way of wind-blown sand then the fourth barrier has gradually formed a sheltered place for it to be deposited.
The satellite image (Google maps) shows that there is plenty of sand within the bay of barrier 4 in addition to that at the barrier. Therefore it wouldn't take much in the way of swells to bring that in an enlarge the barrier now. Certainly there are other sandy beaches around for an exchange or movement of sediment.

Martin, having looked at a few close-ups of the beach where I was photographing insects and molluscs, I'm going to back track on what it's made of. Possibly sand and shell. Or all shell. But not just sand. Sorry.