Our Lass and I are recovering from a whirlwind trip to the North East to visit our respective parents. The time was when I wouldn't bat an eyelid at a 4 hour drive up the motorway on a Saturday, with the return journey on Sunday inevitably longer due to the volume of traffic. These days, we need a weekend to recover from the weekend!

"Nae stamina!" as her dad would say.

We had booked into a B+B for the Saturday evening, a farmhouse by the River Tees near Piercebridge. We ate at a pub in the village and then had a gentle stroll back to our accommodation, fortified as we were by a bottle of wine and some pleasant weather. Standing on the road bridge over the river, we were watching a flock of Sand Martins swooping down to the water to catch insects, when Our Lass pointed to a flash of blue and red, as a Kingfisher flew upstream, beneath our feet. Taking a potter through the woods by the river bank, we walked between carpets of Ramsons (Wild Garlic), their white flower heads like star clusters amongst the galactic greenery of their foliage.

Along the track to the B+B, with a hedge on one side and open pasture on the other, we spotted several Hares and the occasional Lapwing. Our ears picked up the calls of Yellowhammer, Whitethroat and Skylark, as well as numerous hirundines overhead. Skirting the house, we came to some outbuildings, where we startled a Little Owl, perched on a gutter. Across the fields, we could see a Heron, stalking his supper in the damp grass, whilst the the cry of a Curlew came to us through the cool evening air.

As the light faded, we retired to our room and watched more Hares in the field visible from our window. A few dark shapes loomed towards the glass and disappeared upwards, which, in my happy state, I took to be Swallows, nesting under the eaves.

The following morning, with crisper light and a sharper eye, we were astonished to realise that these birds were, in fact, Swifts. As we stood by the window, we could hear their calls from the nests above our heads, a muted version of the full throttle screaming they normally produce as they hurtle through the air.

My only disappointment was missing the Red-legged Partridge that walked past the window whilst I was in the shower. Mind you, I don't think the world is quite ready for a stark naked and dripping wet Tense, dressed only in a pair of binoculars and a smile.

After a hearty breakfast, our landlady suggested we have a short walk along the Tees, to the remains of the Roman bridge and back. As it was raining, I did not take my camera, an omission guaranteed to produce something photogenic. Sure enough, our wanderings by the river revealed several Goosanders with ducklings, a pair of Common Sandpipers and a Grey Wagtail. Thank heavens for Our Lass's wee point 'n' click. 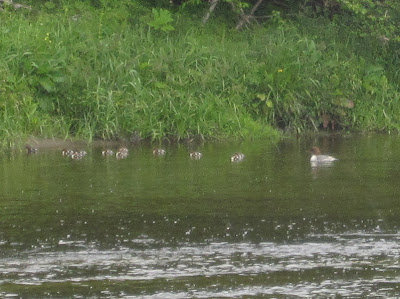 We counted eleven tiny ducklings with this Goosander, four of which hitched a ride on her back as she swam across the river. I've included this particular shot as it shows the north bank of the River Tees i.e. County Durham!
Posted by Imperfect and Tense at 22:28

Sounds like an excellent excursion Graeme, with some fine birds.