Not so secret argent

Way back on the last day of 2009, I wrote out a few aspirations for the next twelve months. Whilst stating that they were in no particular order, top of the list was "a second honeymoon". Hence the cryptic "if it was a mountain, this year would be Suilven" remark. That's silvern, as in "made of silver" for our 25th wedding anniversary, as opposed to sylvan, or made of wood, which would only be our 5th.

And so to the day itself...

We awake from our slumbers and, as our eyes become accustomed to the daylight once more, we remember that we have spent the night in a shepherd's hut. A luxurious shepherd's hut admittedly, but a hut nonetheless. Never let it be said that I didn't know how to spoil a girl.

It has all the necessary features to be defined as a shepherd's hut: corrugated roof and walls; four rickety wheels; wooden steps up to a stable door; sheepskin rug on the floor. However, the list continues in a less sheepy tone: king size bed; ensuite shower room; flat screen tv; fridge. From outside, we can hear the contented clucking of the owner's hens and not much else, such is the tranquillity of this bijou B+B at the bottom of a garden in a sleepy village. The top half of the  stable door is open and an 18 week old kitten attempts to gain entry to Sheep Mission Control. We are in Sussex, on the edge of the South Downs, not far from Worthing, where we were married in the summer of 1985. 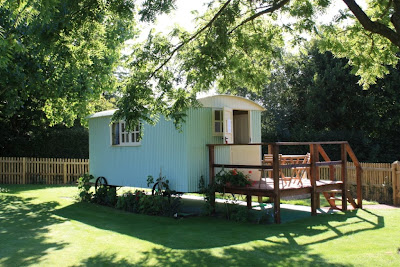 After a sumptuous breakfast, we decamp to Arundel to visit the Wildfowl and Wetlands Trust reserve. The WWT's UK sites fall into several categories; pure nature reserve, duck zoo or a mixture of the two. Arundel is primarily a duck zoo at this time of year and we manage to put our sanity on hold for an hour, whilst we look around. To be fair, the exhibition showing the numerous uses of wild flowers and herbs was very interesting. Please don't jump to any misguided conclusions about "sanity on hold" and "uses of... herbs"! 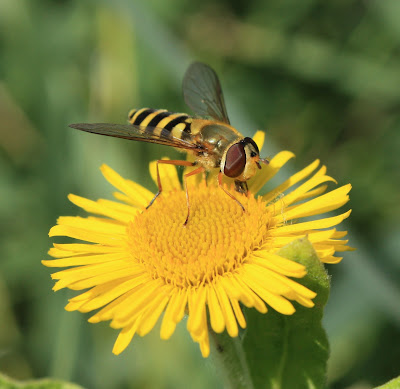 After a celebratory lunch in the garden of the Black Horse in Amberley, we then head for the RSPB reserve at Pulborough Brooks. From the smart, new, visitors' centre, it is possible to walk in one direction to explore the water meadows of the Arun valley, which, after years of detrimental drainage, are being restored to their former state. In the other direction is a totally different habitat, as the RSPB seeks to return a conifer plantation back to heathland, and so encourage Nightjars and Dartford Warblers back to the area.

We walk through this part of the reserve in the heat of early afternoon. There is little bird activity at this time of day, so when we arrive at a small heathland pond, half in the shade of trees, we stop to investigate for odonate interest.

Several male Southern Hawkers are patrolling along the banks, occasionally resorting to aerial combat to define their personal space. Ruddy and Common Darters compete for warm spots on logs, fence rails and patches of sand. A few male Emerald Damselflies roost on vegetation near the water's edge whilst the females stay away from all the hustle and bustle, preferring to rest  amongst the bracken and grass some metres away. 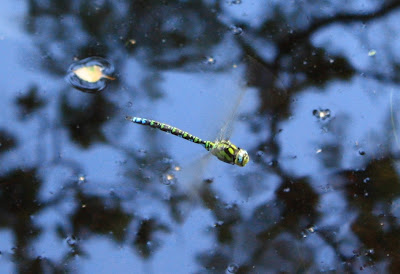 Continuing our walk, we potter around an oak woodland and then return to the centre for a pot of tea. Amongst all the usual visitors to the bird feeders, we spot either a Willow Tit or a Marsh Tit, but it doesn't hang around long enough for us to be sure.
Driving down to the picturesque village of Burpham, we check into the eponymously named Country House hotel, where we spent our wedding night all those years ago.
In the evening, we wander down to the River Arun and its water meadows, catching a brief view of a Kingfisher. The light of the setting sun accentuates the warm orangey red of its underside, so that, for once, the electric blue flash is not its most prominent feature. Walking back to the edge of the floodplain, we glimpse a ghostly white shape disappearing behind an Ash tree in the corner of the field. We hardly dare breathe as we wait to see if the Barn Owl has spotted us. Suddenly it swoops down under the branches into view, out across the meadow, passing us without even a glance. Turning at a hedge, it flies straight towards us at head height, at the last second soaring a few feet over our heads and then disappearing behind the Ash tree again. We're unlikely to have such another close encounter with a wild owl without being reincarnated as field voles. Our lass wonders if it was aware of our presence. I think it probably was, but it just didn't give a hoot.
Later, in the village pub, we raise our glasses in toast to 25 glorious years and a wonderful  anniversary day. Watch this space in 2035 for the next instalment!
Posted by Imperfect and Tense at 12:16

What a lovely blog

Thanks John, you big softie :o)